It’s estimated that each year 640,000,000 kg, or 640 000 metric tonnes, of discarded fishing equipment end up as “Ghost Nets” or “Ghost Fishing Gear” in the world’s oceans. Which is equivalent to the weight of 50,000 double-decker busses. Ghost Nets continue fishing for up to 600 years resulting in millions of killed marine animals and fish every single year. The nets also comprise more than 50% of all harmful microplastic in the ocean.

There’re several problems connected to Ghost Nets; after being lost or dumped by the fishing boats, one must embark on the task of tracking, salvaging and recycling the nets.

The Perfect World Foundation Project Ocean is about bringing awareness to these problems, protecting marine life from harm, and creating solutions to be implemented on a global basis to finally put an end to ocean plastic and Ghost Nets.

With our ocean campaign “The Blue Bucket” we want to engage everyone to pick up plastic and debris from our oceans, coast lines and beaches. The Blue Bucket, which is a symbol of the campaign itself – with the aim of raising awareness about the massive plastic pollution of the world’s oceans – is also a tool to be used to pick up plastic debris into. Yes… the bucket is made of plastic (recycled) but is intended to be used again and again, instead of disposable garbage bags. And the bucket should of course never end up in the ocean. 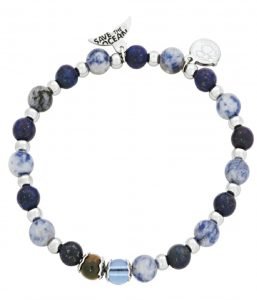 The Perfect World Foundation is partnering with Divers Against Ghost Nets and jewellery designer Johan Billgren to pick up ghost nets, lost fishing gear and other trash from our oceans. You can support our joint work for healthier oceans by buying By Billgren’s super stylish Save the Ocean bracelet.

Buy Save the Ocean Bracelet

DIVERS REMOVE WASTE FROM OUR OCEANS

Fredrik Johansson is the initiator of the initiative “Rena Mälaren”, where divers dive to pick up waste from our oceans. This is one of several initiatives The Perfect World Foundation supports in “Project Ocean”.

Sotenäs runs a recycling center for marine waste, and where The Perfect World Foundation works, among other things, with efforts to remove plastic from our oceans and raise awareness of its harmful effects. The Perfect World Foundation is also working to develop and create new collaborations to support the existing work initiated by Sotenäs in locating, removing, and recycling lost fishing gear.

SAVE THE OCEAN – BRACELET

Jewelry designer by Billgren has created a unique Save the Ocean bracelet to create commitment to save our oceans and the importance of plastic free oceans. The bracelet costs SEK 349 in the byBillgren web shop, of which SEK 100 goes in full to The Perfect World Foundation and our Save the Ocean projects.

PLASTIC-FREE OCEANS – 10% OF THE ECO COLLECTION

Samsonite’s ECO collection is made from recycled consumer waste in Europe and comes in recycled packaging – all this without compromising on comfort or properties. When purchasing an environmentally friendly suitcase from the ECO collection, Samsonite donates 10% of the ECO purchase to The Perfect World Foundation, during an entire month.

Animelo, who works with Infomercials & Animated Film, supported The Blue Buckets campaign “Plastic Free Summer” during the summer of 2019, by producing an animated information film to spread knowledge and awareness.

Associate Professor and Researcher at the University of Gothenburg, Sweden